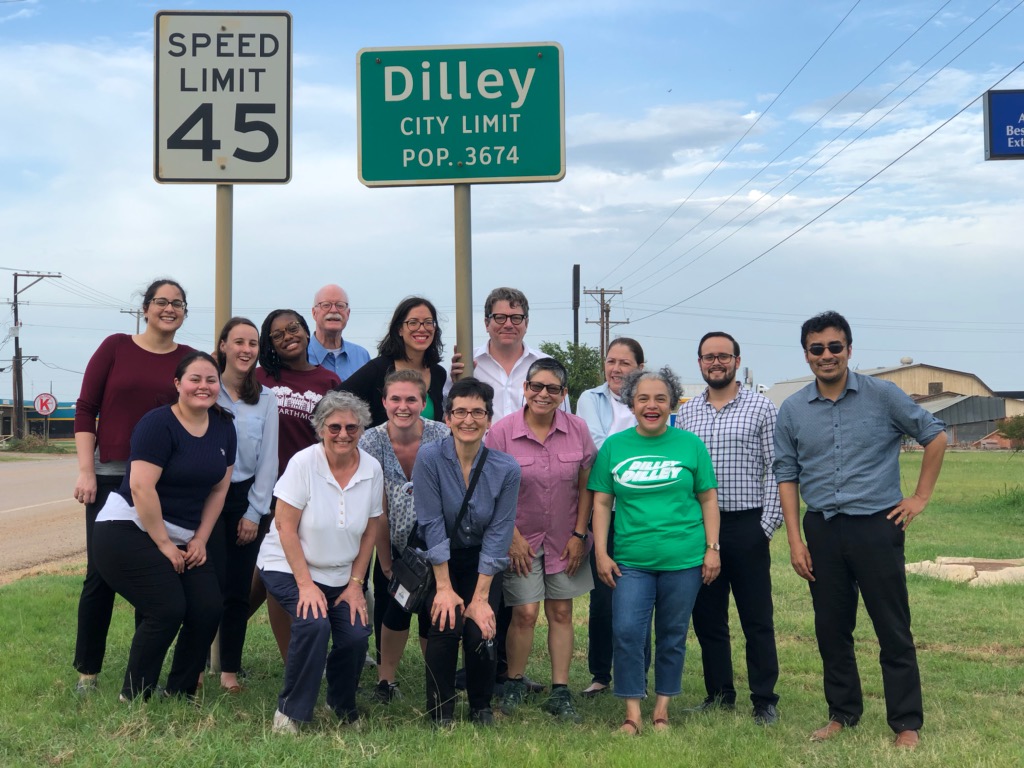 A Perspective from the Border

Laura Rodriguez is an attorney at Pechman Law Group. In June, Pechman Law Group sponsored her trip to Texas to volunteer for the Dilley Pro Bono Project.  Laura helped provide legal assistance and support to detained immigrant mothers and children seeking asylum in the U.S. Below she shares some of her experiences and observations.

At the end of June, I travelled to Dilley, Texas to provide legal services to the women and children being detained at the Dilley Family Residential Center, the largest family detention center in the United States, located about an hour north of the U.S.-Mexico border.  Together with a group from Fordham Law School, I volunteered with the Dilley Pro Bono Project.  The Dilley Pro Bono Project provides free legal services to detainees in Dilley, all of whom were transferred there after having been held for days or weeks in various Customs and Border Patrol detention facilities.  The conditions at Dilley are comparable to those of a federal prison but are reportedly much better than border facilities, which have recently been the subject of intense public scrutiny and legal action.

I spent a week meeting with women who were detained with their children (some had also been separated from other family members at the border).  Nearly everyone being held at Dilley travelled from the northern triangle of Central America: Honduras, Guatemala, and El Salvador. All were seeking asylum.  When they spoke about the decision to leave home, they described desperation, fear, and violence including physical and sexual abuse, gang control, political unrest, drugs, death threats, and murder.

One of the women I met was with her six-year-old son.  They had come from Guatemala.  The boy’s father, who the woman had divorced, wanted to train the child to be a drug dealer and said he would take the boy by whatever means necessary.  He and his family are known drug dealers and began stalking this woman, waiting outside her home and her work, reminding her of the promise that the boy’s father made.  A few weeks before they escaped, one of the woman’s coworkers was raped at knifepoint by associates of the boy’s father.  While assaulting her they said, “this is what happens when people don’t do what we say.”  This was understood as a clear sign that her safety, and her son’s life, were in danger.  She sobbed silently throughout most of our time together, deathly afraid of what might happen if she did not qualify for asylum.  The little boy often sat by her side, quietly coloring.  His face darkened when he heard mention of his father and he would quickly stop coloring to hug and comfort his mother.

Throughout the week I helped prepare the detained women, and sometimes their children, to be interviewed by Asylum Officers.  Based on their interview answers, the Asylum Officers determined if the detainees had a credible fear of persecution in their home country.  If not, they would be deported.  The preparations were difficult. In one instance, I had to teach a seven-year-old girl the meaning of the word terrorist because Asylum Officers routinely ask the interviewees if they are terrorists. Many of the detained women were afraid to speak and share their traumas with strangers.  Others did not want to speak in front of their children but also did not want to leave their children alone, especially not after the experiences they suffered crossing the border and being detained.  One of the women I spoke with was with her son, who suffered from epilepsy.  Her son’s medicine had been confiscated and thrown away by border patrol when she arrived in the United States, despite it being clearly labeled and her carrying a doctor’s note with prescription information.  She was able to convince an agent to fish some of the medicine out of the trash but by the time I met her, she had none left.  The doctors she spoke to in detention said that her son did not need any treatment until he had a seizure.  The neurologist that treated him in Mexico said he needed daily preventative treatment.  She had no medicine left and her requests for prescriptions had been denied, so she feared leaving him alone, afraid of what might happen when she took her eyes off him.  Another woman kept her son by her side because she had already lost him once, when he was kidnapped by MS-13 while playing soccer on the street.  He was gone for two weeks but found a way to escape and then quickly fled the country with his mother.  While in Dilley, they received word that the gang was still looking for the boy.  He would be killed on sight if they returned to Honduras, as would she for helping him escape.

Fortunately, all of the women and children I worked with got positive credible fear determinations and were released from detention to continue their asylum applications while living in the United States.  In fact, most of women and children represented by the Dilley Pro Bono Project have positive interview results.  As of January 2018, less than one percent of the clients represented by the Dilley Pro Bono Project received negative credible fear decisions.

Approximately 150 women, and their children, met with legal volunteers and received interview prep help during the week that I spent in Dilley.  Since then, the United States government has introduced various policy changes, making it much harder to continue offering these legal services to asylum seekers.  A new directive has been introduced that, if enacted, will decrease the amount of time detainees have to prepare and meet with legal counsel prior to their credible fear interviews.  Furthermore, the recently introduced Remain in Mexico Program and Safe Third Country Agreements could make it impossible for potential asylees to obtain legal counsel at all.

I will never forget the courageous women and children that I met at the detention center and am grateful to have had the opportunity to help in some way.  I am also grateful to Pechman Law Group for supporting this pro bono effort and allowing me to spend a week in Texas with the Dilley Pro Bono Project.  To learn more about the Dilley Pro Bono Project, or if you would like to donate, please click here.